Ukraine’s Serhiy Rebrov has recently signed to Al Ain Football Club as the new head coach replacing Portuguese Pedro Emmanuel whose contract was terminated by the end of past season.

In a statement to Al Ain Club website, David Platt, the Sports Director, stated: “After an extensive search for our new Head Coach, we are very pleased to welcome Sergei to Al Ain. Serhiy showed great and remarkable enthusiasm during the negotiations phase.”

He pointed out that the mutual desire between the two parties to achieve the team’s aspirations and win titles led to conclude the contract in words of one syllable.

He added: “Not only does Sergei bring an extensive and world class playing background to his role, but since his transition from playing to coaching, he has proven that he is a winner as a coach also. He has already proved this by winning many titles in different countries during his coaching career to date, and we are confident that he has the DNA that is required to be head coach of Al Ain FC.”

The Sports Director went on to say: “His experience, knowledge and ambition will lend well to developing the team and helping us to make the key improvements that are necessary to take the team to where it needs to be.”

“We welcome him to the club and look forward to him playing a huge part in driving the club forward over the coming time period and make the Ainawi Nation happy,” he signed off.

Expressed His Best Wishes to the Boss.. Pedro: I will not Forget the 18 Months I spent with the Boss Squad

“I would not forget the past 18 months I spent with Al Ain Football Team and thanks for the Board of Directors for giving me the opportunity to lead a big team,” by these words Pedro Emmanuel opened the post-match press conference of his team’s last match in the current season.

He added: “Iwould like also to thank the fans who’s I wished I could see them in the standings again, but it was difficult due to the health precautions and measures.”

He pointed out that after spending great 18 months with the Boss which started as of January 2020. “It was a big challenge and we concluded the past season in the second place of the league and we were to play the final match of the President’s Cup.”

“However, this season was difficult, not only for Al Ain Team big for all other clubs. We agreed in the beginning of the season to work hard and perform honourably, but this is football and we could not achieve our aspirations,” he said.

He also highlighted the fact that three seasons elapsed and Al Ain could not win any competition. If you want to change, you have to do a lot.”

He signed off by wishing Al Ain Team and everyone all his best wishes and stressing that he would not forget the great past 18 months.

Caio’s Goal Gives the Boss the Upper Hand.. The Boss Concludes the Season by Winning Hatta 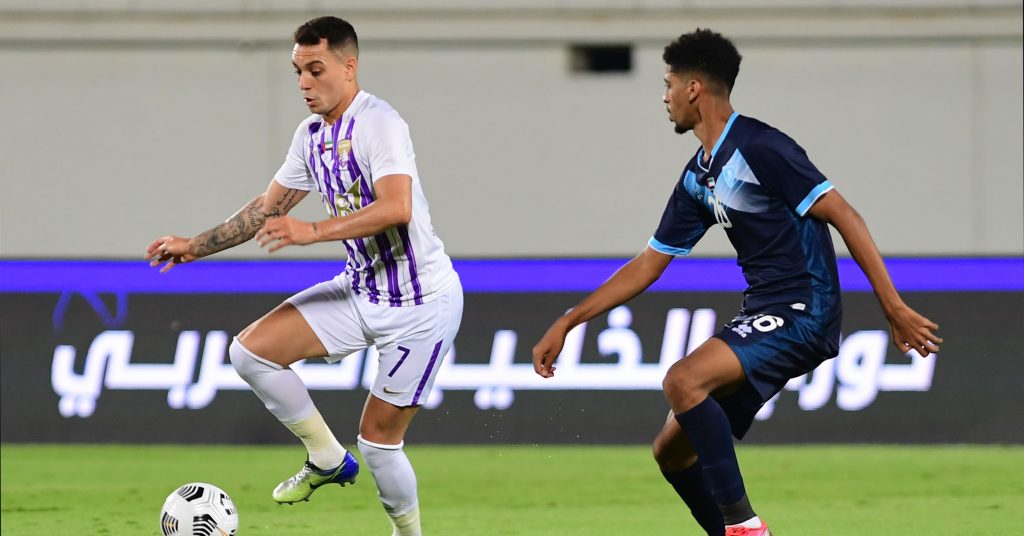 Al Ain Team won matcheeek 26 of AGL against Hatta by 1-0. The match was held at Hazza Bin Zayed Stadium this evening.

Al Ain took the lead in the first half when Caio Canedo scored the sole goal of the team at 31 minute.

By this result, the Boss concluded their season with 41 points and placed sixth. Meanwhile, Hatta leaves the AGL to play next season in the first division.

Mohammed Abbas: Defending the Boss Badge is a Massive Responsibility

Al Ain Mohammed Abbas stressed that it is important for the Boss squad to snatch the matchweek 26 three points.

“We must win Hatta with all due respect to their aspirations. We would play the coming match as usual though it is the last one in the season.

Commenting on a question on whether this last match does not make any difference, he said: “Since we were playing in junior teams in the Al Ain Football School and Football Academy that we all are held accountable when it comes to defend the Boss badge. We are all set to play honourably even if it is the last match in this season. We all must redouble our efforts and fight hard in all our matches and hope to end this season well.”

As for joining him to the first football team, he commented that it is every player’s dream to play with stars of the Boss.

“It is the nicest dream ever. However, I have to spare no effort to improve my skills to keep my position in the first team. I hope all will be OK and wish the players and myself all the best,” he concluded his statement.

Pedro: We Respect Hatta’s Aspiriations and We Seek to Add more 3 Points to Our Balance

We are scheduled to play our last three matches within three days interval and the team’s goal remains the same, i.e. to snatch the match three points, Al Ain head coach Pedro Emmanuel inaugurated the pre- match press conference of the last match of this season.

The matchweek 26 of AGL is scheduled to be played at Khalifa Stadium instead of Hazza Bin Zayed Stadium as the latter will be the venue of the final match of the President’s Cup on 16 May 2021.

He added: “We would play our last match against Hatta who is confirmed to relegate to the first division. This means they would play their last match with no pressures.”

He also said that his team is to enjoy this match and be ready for it, while showing great respects to the guests and the Boss loya fans as well.

Pedro pointed out that tha Boss has to add another and last three points to be 41 points. He stressed that this is what the team is focusing on.

“We knew that our mission would not be that easy against a strong opponent. It was a big challenge for us!” Al Ain head coach stated in the post-match press conference of matchweek 25 of AGL against Al Jazira.

Pedro Emanuel said: “We sought to surprise the home team by controlling the ball and taking the lead earlier, but we are missing several key players during the past period. We did our best to find the best solutions and create the required balance to make the difference tonight.”

Analyzing his team’s performance, the Portuguese pointed out that his team could not create critical chances in the first half as they planned, and the opponent was the best party.

He added: “Al Jazira took the lead, and we tried to return to the match and level up the result, especially at the moment the referee denied Al Jazira a penalty kick. The opponent’s players were so nervous, and we tried to take advantage of such conditions and got a good chance to achieve the draw, but Laba failed to score.”

He concluded his statement by saying that Al Jazira succeeded in scoring their second goal, and they were the better team on the pitch.