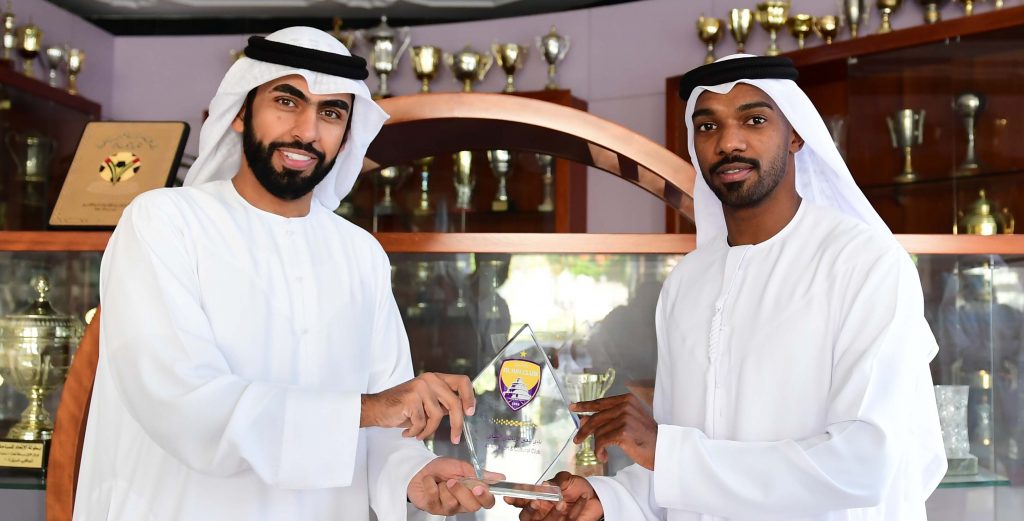 Initiative and Describe it as the Loveliest Gift

Shiotani to UAEDA Members: Your Questions Were Difficult …

I Will Think About Retiring After 40

Sometimes I Long for the Japanese League, But I am Happy in Al Ain FC

I am thinking about Doing Business After Retirement

We Apologize to Al Ain Fans, and Soon We Will Achieve the AFC Title

In light of the critical role that Al Ain Sports and Cultural Club has been playing in consolidating the concept of the comprehensive sports club, Al Ain Club management sponsored an online initiative on the occasion of Eid Al Fitr by hosting a remote meeting with the members of the UAE Deaf Association (UEDA).

In line with this attitude, the “Boss” stars were so keen to adopt the best societal practices and enhance communication with all segments of society in line with the values and principles of the club, Khalid Eisa and Tsukasa Shiotani attended an online meeting with UAEDA members to express to them Eid greetings. The UAEDA members who participated in the meeting expressed their pleasure in this initiative.

The two players were keen to learn the principles of sign language in the presence of Mr. Mussabah Saeed Al Neyadi, President of UAE. The professional trainer in sign language, Abdullah Abdul Qadir Taljabini, who was keen to teach Al Ain stars some basics at their request in greeting and congratulating the attendees and congratulating them in sign language without using any means of interpretation. After the meeting, the two stars presented them with the official club jersey and the Boss memorial shield.

In response to a question addressed by the attendees about his daily routine in the holy month of Ramadan, Khaled Eisa said: “The holy month of Ramadan has advantages and its privacy for everyone. When it comes to me, I prefer to spend this holy month with my family and brothers. I always hope that it coincides with an official break time as the atmosphere of this month is exceptional. We all live in true intimacy and a sincere feeling of comfort. It is a month of mercy, fasting, resurrection, and worship. We provoke to Allah Almighty to accept obedience from everyone.”

Regarding his program during Eid Al Fitr days, he commented: “This time things will be different as it coincides with the players’ annual holiday, and certainly Ramadan days are similar to the Eid days in terms of its privacy. We usually visit our relatives and friends to express congratulations and blessings. However, we have to consider the precautionary measures and directives that the competent authorities have circulated. We ask Allah Almighty to have things back to normal soon.”

Commenting on a question about his passion for commercial projects and the extent to which his preoccupation with football has affected those projects, he said: “I do not think there is an impact in the true sense. Indeed, I can completely separate my career as a footballer, which I consider my main job now, and other projects that I love. I always ask Allah to grant us success in both of them, as I aspire to complete my journey in business in the post-football stage.”

Regarding the state of Ainawi fans’ dissatisfaction with the results of the current season, he said: “We apologize to them a lot, and we are well aware as players that the ceiling of the aspirations of Al Ain fans is unlimited. They are valuable fans, and their support means a lot to the players. We promise them to do our best in the next season and the coming seasons.”

Khalid Eisa answered the last question addressed by the UAEDA members about him and his teammates being considered one of the best generations in the club’s history and that everyone is wondering when they will achieve the AFC Champions League title, he responded briefly by saying, “Soon, God willing.”

On the other hand, the questions addressed to Shiotani were somewhat different from those of Khalid Eisa. The first question was about his participation with his teammates in national and religious celebrations and community events, specifically in the month of Ramadan. He said: “Before coming to the UAE, I did not know anything about the month of Ramadan. However, I currently become well acquainted with the peculiarity of this month. The atmosphere in which people live here is a source of comfort and happiness. I feel so happy to spend these days with my teammates.”

Commenting on a question about the atmosphere in the stadiums without an audience, he said: “In fact, we are missing the Ainawi fans a lot, and I hope to meet them soon to support the team from the stands.”

In response to a question about his future after retirement, he said: “I hope to play until I am 40 years, and then I will retire from football and devote my time to my academy in Japan. At that time, I will become a coach and teach children football.”

Regarding his participation in the Club World Cup-UAE 2018 and his best memories in that Championship, he said: “I believe that answering this question is also difficult, because all the matches in this tournament were important, except that facing Real Madrid and the goal I scored in the final match was historical. That goal was important not only for me but also for Al Ain Club, which represented the UAE football honorably.”

On the reasons why Al Ain Club did not win any championship during the past three seasons, he said: “I believe it is the most difficult question, but there are many reasons, including players’ absences due to injuries and the enrollment of some players in the national service. Such factors may have affected the team’s performance, but we remain responsible for the situation, which was not good. I hope to close the past chapters and work hard for the future so that we can be champions next season.”

In response to a question that since you came to the UAE in 2017 until now, how do you describe the relationship between you and your family with the city of Al Ain, he said: “When I came to Al Ain, I did not know much about it, but after spending about four years in it, I loved it very much. It is not a secret to say it is the most beautiful city for my family and me.”

As for the situation that the world is experiencing combating the Corona pandemic, he said: “The UAE is one of the best countries in the world that has succeeded in addressing the pandemic due to the country’s high capabilities and strict procedures.”