Mohammed Jamal: We Need to See the Standings Full of Loyal Ainawis 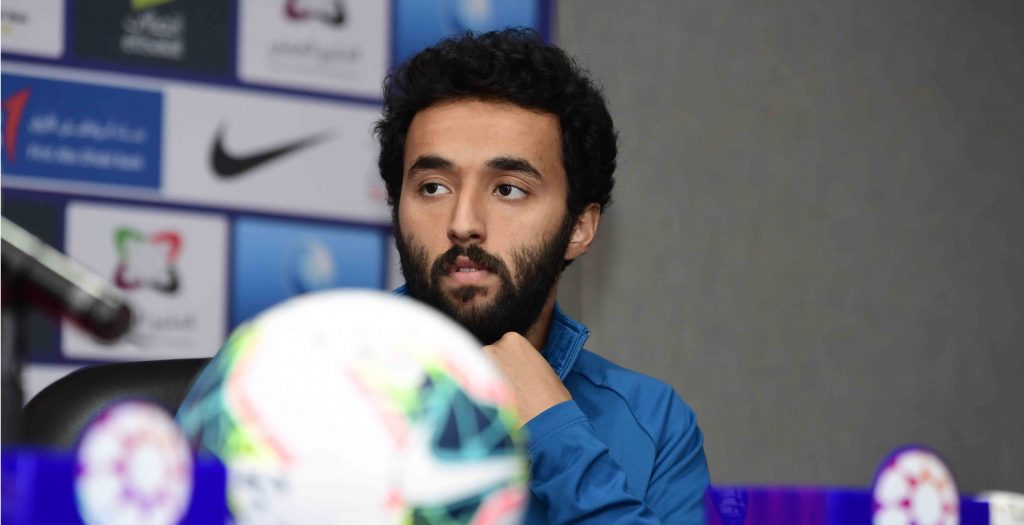 Al Ain player Mohammed Jamal addressed a message to the Ainawi Nation that it is necessary to attend the Boss coming match against Shabab Al Ahli Dubai to support the players. “This match requires the fans to attend it, and we are all expecting to see the standings of the stadium full of enthusiastic Ainawi fans.”

“We do not need to remind the fans to attend the next match against Shabab Al Ahli Dubai. They indeed know what they are meant to do, and we all are looking forward to seeing the standings full of great fans and supporters. As for us, we know what to do on the pitch, and we will be up to their expectations!” Mohammed Jamal stated in the pre-match press conference held on Tuesday at Khalifa bin Zayed Stadium.

In response to a question on his tactical roles to clear all balls within his area of responsibility in the midfield, he said: “I carry out any tasks the head coach requires me to do. When I was playing for Al Jazira, the head coach was tasking me to do certain roles, and I was fully committed to achieving them. I am a tactical footballer, and absolutely the head coach anticipates the opponent’s plans and changes my tasks based on the current course of the match. I spare no efforts to conduct all the tactical roles on the pitch.”

He concluded his statement by expressing his sincere appreciation to the head coach for his trust in his skills and selecting him to be in the team’s starting lineup. “I am so pleased by the head coach’s trust and support. He talked to me during the past days on the importance of pushing myself to the limit to improve my performance and skills. I am at his disposal anytime.”