Players’ Skills Would Make the Difference in ACL2020.. Pedro Emmanuel: I Do Trust My Work and My Team’s Potentials to Achieve the Desired Aspirations 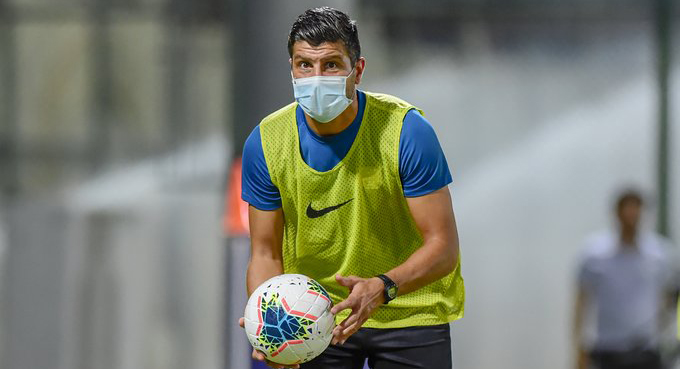 We Look Forward to Win ACL2020 Matches by Determination, Firm Will and Commitment

We Own Success Factors to Win All our ACL-2020 Matches

Prior departing the UAE to resume the team’s remaining matches of the AFC Champions League 2020 (ACL-2020), Portuguese head coach of the Al Ain First Football Team, Pedro Emmanuel, stated in an exclusive interview with the Al Ain TV Channel that his team exerted lots of efforts during the preseason training camp in preparation for the upcoming new season. “We trained hard to turn in shape and be ready for all the critical competitions they are participating in locally and continently.”

“We still lots of hard work to do as we are resuming the matches of the ACL-2020. This is why we played the recent friendlies as we want to make the players experience the authentic atmosphere of official matches,” Pedro pointed out.

“We have a busy and tight schedule as we are playing four games within only nine days, and still we have more matches. This is a good indicator of the team’s performance as these four matches will further push us forward.”

He also indicated that unlike other opponents, his team had not played any official matches, and this makes the situation harder for them. “Regardless of this reality, each and every player is pushing himself to the limit to achieve the pre-set goals.”

Coach Pedro added that the Boss would play all the matches of ACL-2020 with high desire and determination from the first to the last minute to snatch the points of each game and qualify for the next stage.

“We all are aware that our mission will not be that easy, but will spare no effort to achieve our goals.”

He put an accent on the fact that his squad would not deal with the term “possibilities” to qualify, but with the principle of unquestionability to achieve the team’s aspirations.

On missing individual players for different reasons, he assured that his team is required to adapt smoothly with changes. “I do want to have all the players on board, whether those who joined the national service or injured. Their presence would boost the team’s strength and redouble our chance to win, given that we are scheduled to play four matches within only nine days. Indeed, it is all about a good organization to fulfill our obligations.”

Pedro named the players who are not listed in the team’s lineup, including Mohammed Ahmad and Mohammed Bu Senda due to injury, Mohammed Jamal and Saeed Al Minhali for joining the national service, and Mohammed Fayez and Mohannad El Enezi.

He also pointed out that due to the ACL-2020 regulations, he could not make use of the resident players, and this is why he referred to the Reserved Team and selected four players to join the First Team.

“We joined Saoud Al Mehri, Ali Al Blooshi, Saif Al Harthi, and Khalid Al Blooshi to enhance the team’s lines. They are skillful and represent the future nucleus of the team.”

He highly acclaimed their potentials and be able to join the first team since they understand that they must refine their skills and push themselves to the limit. “I will give them the opportunity to ensure they could be included in the starting lineup because simply I do trust their skills and quality. I am sure all the squad will do their best in the upcoming matches and show their fighting spirit to qualify.”

Commenting on a question on his expectations considering that his team kicks off the new season by playing the ACL-2020 matches, he stated: “When it comes to expectations and talking specifically about a big team like Al Ain Team, then you are talking about crystal-clear goals and get no choice except winning all matches.”

He added: “This is why I joined the team, as it is simply a big club. All its members are required to work hard to prove this fact and play as a big team. It is victories that bring glory, and this pushes us to be committed and show our massive desire to achieve the pre-set goals of participating in ACL-2020 and the league matches. We are playing against strong opponents who have the same desire to put firm hands on titles.”

“I do trust my teams’ potentials, and I believe that it is the players’ skills that would make the difference and enhance the team’s strength. Also, not to forget our loyal fans who will support the team from far away. I am sure the team will perform well and up to the expectations, and we do have all the motives to have a good season despite all the difficulties facing the football game and the world as a whole. We are so determined to put a smile on the faces of the Ainawi Nations,” Pedro said.

He went on to say that he came to Al Ain Club to achieve brilliant results in all matches and that all the fans are well aware of this fact.

“All our past season experiences are so critical, and we are yet to start new important stages. I know how important this championship to Al Ain Club, and regardless of the opponents we are going to meet, Al Ain Team still has chances to qualify and fight to do so. If we have such a mentality, we will achieve our objectives for sure.”

He stressed that he fully trusts his work and his coaching team’s sincere efforts, and players are exerting. He said that he is so sure that winning the title of the ACL-2020 means to have a new glory and that the team will take their chances whatever it takes.

“I know that we do not have big chances in this group, which I call it the “group of death” as all the teams have equal chances to qualify to the next stage, and none has guaranteed winning one of the cards of qualification. Also, we know the opponents’ quality and that we did not start this season in the right way. This is why we have to be realistic in our analysis, and we know how important our first two matches.”

Pedro pointed out that the opponent in the first match is a strong team and all set to snatch the game’s points and then play the remaining matches to qualify for the next stage of the ACL-2020.

As for his team’s permeations for the first match, he said: “All went well, and as planned despite the breakthrough of COVID-19 and that the team plays at home, we know the capabilities of our team and trust our players’ quality skills. We are highly determined and so committed to win the match and snatch its three points.”