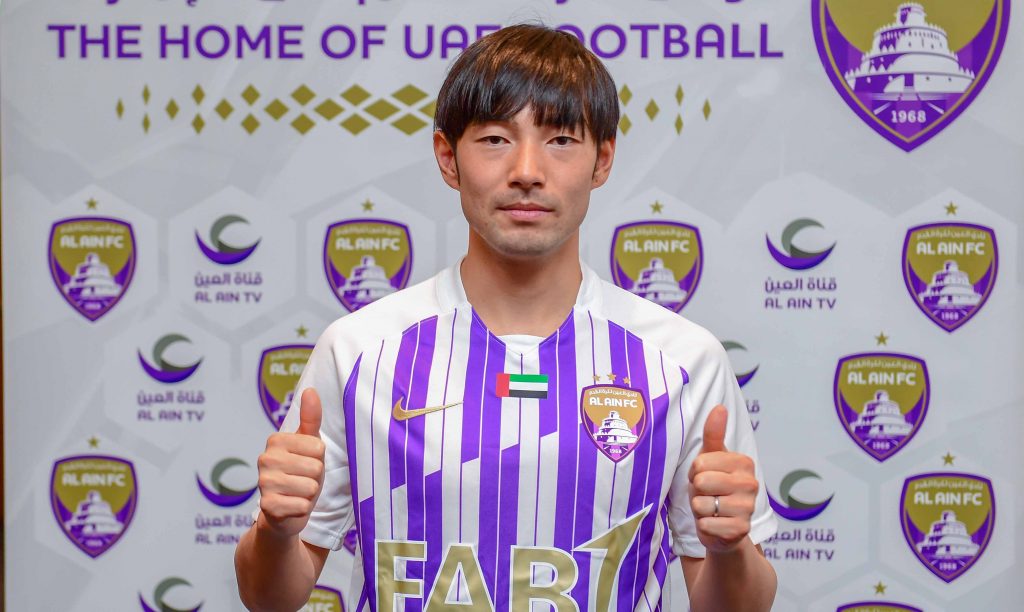 Shōya: Proud to Join One of the Best Asian Clubs
Fully Ready to Defend the Boss’ Badge

The newcomer is scheduled to play as of the second round of the Arabian Gulf League (AGL) to start his journey with the team, defending its badge in the AGL and the AFC Champions League 2021.

On this occasion, Sports Director David Platt stated “I would like to welcome Shoya to Al Ain FC, after an extensive search and a good job done by all parties, we believe we have signed a player of the level required here. We welcome him to the family and very much look forward to seeing him in an Al Ain FC shirt in the upcoming games. To make such a signing in a difficult January transfer market is never easy, and I’d like to thank the team of people at the club who have worked tirelessly to ensure we reached this conclusion”

Portuguese Pedro Emmanuel welcomed the new player commenting that “concluding Japan’s Shōya Nakajima is one of the greatest and happiest news I have heard and that I have been waiting impatiently for in this time of the season. Nakajima enjoys the skills and all the qualities we need this coming period. He will be able to make a difference with the team.”

Pedro stated that he kept saying and will continue to do so that Al Ain is a good team and has top-quality players and that the team needs to boost its power by having new players to achieve the team’s goals and make the fans happy.

The Al Ain head coach availed the opportunity to extend his sincerest appreciation for the Al Ain Club’s Board of Directors for concluding this critical deal in this crucial time.

In his first official press statement following signing his contract, Shōya Nakajima commented: “Absolutely, so pleased and proud to play for one of the best clubs in Asia. I am aware of all the local and continental challenges waiting for me while playing for the only Emirati football team winning the AFC Champions League title and a team with unprecedented and record achievement in the FIFA Club World Cup- UAE 2018.”

Japan’s player added: “Success and great achievements in football are always associated with commitment, dedication, hard work and showing the spirit of loyalty, belonging and fighting to defend the team’s badge. I experienced abundant challenges while playing for several clubs, and each time I overcome them because of the passion I have for football. Today, I have a new challenge with a big and lofty team with ambitions that never soar below the skies. I hope that my teammates and I would be able to fulfil all these aspirations and make the Club’s grassroots happy and proud.”

Known for his high skill, speed, and accuracy in shooting, he is fluent in the position of the second striker and winger, Shōya Nakajima commenced his football career at the age of six at Tokyo Verde School when he was a student in 2004.

Distinguished for his remarkable talent, he attracted the attention of scouts in his country, Japan, and in February 2012, when he was sixteen, he played his first match with the first football team in the Emperor’s Cup, to be his first appearance with the first team.

He also played in the Japanese Football League in round 33 against Fukuoka. He scored the equalizer at that time, signed his first professional contract, and then became one of the stars and well-known players of Japan’s football.

His “international” career is full of outstanding records. He joined Japan’s U-17 National Team, then U-20 and U-23 teams, and finally joined Japan’s first national team.