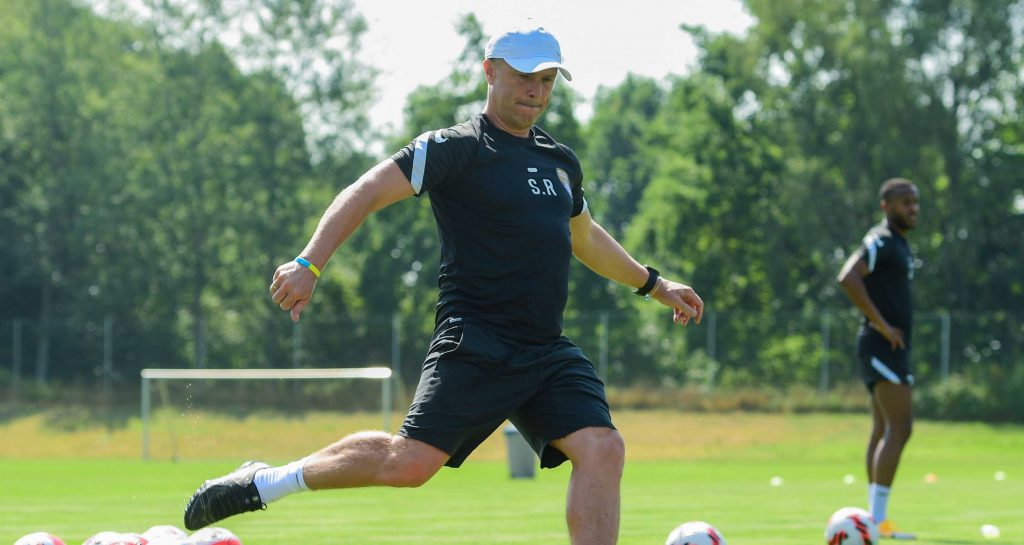 Rebrov: I Do Not Consider the Results of Friendly Matches … So Pleased to See the fans of Ukrainian Community in the Stadium

Andriy Yarmolenko: So Keen to Achieved the Desired Gains out of the Away Summer Training Camp

The match will be held as part of the team’s pre-season training away camp in Germany at the Bad Goegging City of Bavaria State, scheduled to be held during 19-31 July 2022.

The Ukrainian head coach of the Al Ain Team, Sergiy Rebrov, and the newly-arrived Ukrainian player, Andriy Yarmolenko, expressed their most profound appreciation and pleasure with the support of the Ukrainian community in Germany.

Rebrov said: “I know that many Ukrainians live here, and I was thrilled to see them in our first match.”

Regarding the team’s first friendly match per the schedule of the away camp, he said: “The most important thing for me is the high level of concentration during the whole minutes of the match and the players’ adherence to technical instructions.”

“I believe it is a good starting point for the team. All the players trained well during the past five days and were tired. However, the results of friendly matches are not as important as exhibiting how committed they are. Despite their fatigue, I am satisfied with the players’ hard work in training sessions. They performed well and showed a balanced performance and good concentration in the confrontation,” Rebrov said.

Ahmad Al Shamesi, Al Ain Team Manager, hailed the efforts exerted by the players in the pre-season away camp, stressing: “The most prominent feature of everyone’s performance in this important stage of preparing for the new season is their commitment and seriousness. This could be easily realized due to the players’ sense of responsibility towards the special badge they wear on their chest; in addition, they know well that the current stage is concerned with investing in hard work and that the actual harvest will at the end of the season.”

Al Shamesi added: “In each pre-season training camp, there are great challenges due to the long break the players are granted by the end of the season. However, the situation is perfect in the Al Ain training camp, and the team members’ focus is high. They all have a great desire to exert more efforts to achieve the Club’s goals in the new season.”

Regarding the team’s first friendly match in the camp against Hankofen, he said: “Indeed, the technical gains achieved in the first friendly match are great. Thank God the team performed well after a long break, given that the competitor seemed organized at the level of all lines. Meanwhile, the Al Ain squad managed to dominate the match the players showed their strong character during the match. On top of things, we are lucky enough to have no injuries among the players, thank God.”

On the “international” players who have joined the team recently, Al Shamesi said: “The coach, Sergei Rebrov, involved them on the same day they arrived in the evening training session under the supervision of the physical trainer. As a result, they have a good break time and are joining the collective training sessions this evening.”

He said on the team’s matches program: “Today, Al Ain will play their second friendly match. On 31 July, the team will conclude the first stage of the camp in Germany and fly directly to Austria, where the second stage will commence. It is scheduled that the team will play six friendly confrontations. The first will be against Saudi Arabia’s Al Faiha, the King’s Cup champions, on 4 August 2022. Then, on 5 August, the team will play against Kuwait FC, the Kuwaiti league champion.”

For his part, Ukraine’s Andriy Yarmolenko, who has signed newly to Al Ain Team, said: “Everyone here is boosting their efforts in the away camp, and things here look great. The administrative team has provided all the requirements to achieve the pre-planned gains from this important stage in preparation for the next season.”

Yarmolenko expressed his appreciation to everyone here for the warm reception he received and the family atmosphere that dominates the camp. “Indeed, this boosts the morale in the camp, and everyone supports each other here, including administrative teams, medical staff, and players. This is certainly wonderful!”

As for his first friendly match with Al Ain Team, Yarmolenko said: “I have spent about five days with the team so far, and in light of the continuous work and daily morning and evening training sessions, I believe that this period is not easy for all of us. However, we are all aware of this matter and know what we are meant to do during this away summer camp. Certainly, the first match in the preparation camp is always the most difficult one, given the long break that the players had. However, they exerted many efforts in the first match. As a result, we all did well and hope that the head coach is happy with our performance, and this is what his comments are in tomorrow’s meeting.”

Commenting on the team’s support from the Ukrainian community in Germany, he said: “It is not unusual for the Ukraine community to do so. It is our habit to be side by side wherever we are. We all strive to be united, strong, and always together.”

He signed off by saying: “I would like to thank all those who came to support the team here in our match against Hankofen.”