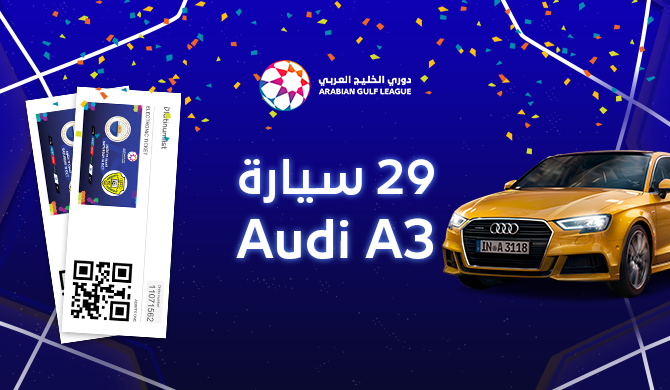 The UAE Pro League has dedicated 30 Audi A3 cars to be distributed throughout the 2019-20 season as a reward for loyal Arabian Gulf League fans. The first car was handed to Saif Al Marzooqi who was the lucky winner upon his attendance of the Arabian Gulf Super Cup match last month. 28 more cars will be handed to winners in Arabian Gulf League matches, split evenly between the two halves of the season, while one car will go to a raffle winner at the Arabian Gulf Cup final.

In order to be eligible for the raffle, according to UAEPL criterial, fans must register and purchase tickets through the official ticketing platform platinumlist.net/arabian-gulf-league and attend a minimum of three matches at the same stadium. Fans stand a bigger chance of winning the more matches they attend.

The initiative is part of a UAEPL effort to support clubs and drive up attendances in addition to creating new fan bases for clubs and promoting fan-club loyalty.

Raffles for the Audi A3 cars starts in matchweek 10 of the Arabian Gulf League, taking place on December 6th and 7th, with three cars up for grabs, one at each of Ittihad Kalba vs Al Wahda, Hatta vs Al Nasr and Al Wasl vs Al Jazira fixtures.

The raffles continue on matchday 12, scheduled for December 19th and 20th with Audi A3 cars on the cards at Al Jazira vs Al Nasr, Sharjah vs Al Wahda, Fujairah vs Ajman and Al Ain vs Shabab Al Ahli.

Winners of the final three cars for the first half of the season will be on December 27th & 28th at Ajman vs Al Jazira, Al Nasr vs Baniyas and Shabab Al Ahli vs Sharjah.