Armed to the Teeth and Poised to Sustain Our Victories Record.. Mohammed Ahmad: The Boss’ Actual Start was the Match Against Al Nasr and We All Set to Win Kalba 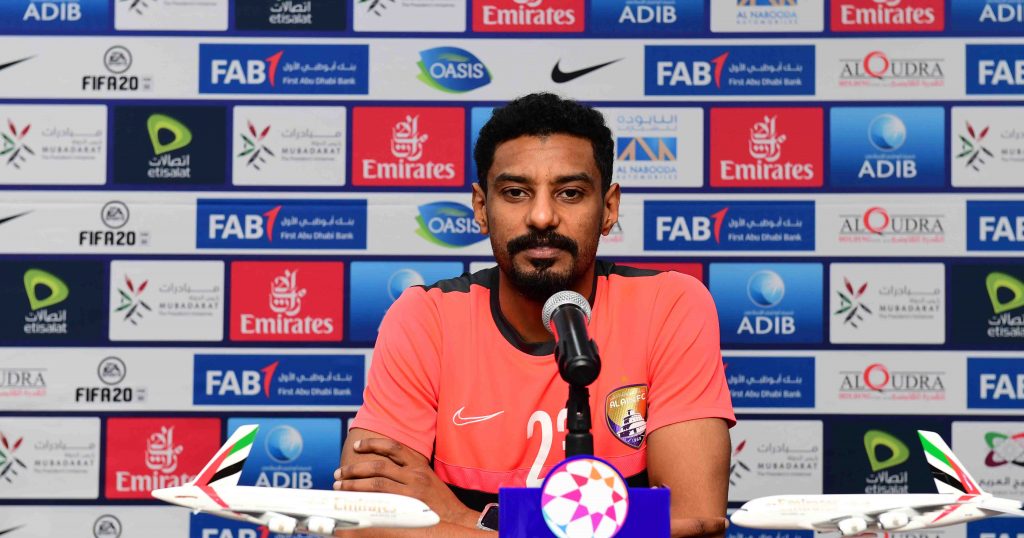 Al Ain Team’s defender pointed out that all teams scheduled to play against Al Ain push themselves to the limit given that the Boss matches receive the UAE football fans’ significant attention and follow-up contrary to the other games they play against other teams.

“This is why some players tend to post challenging statements. However, I have to say that it is not easy to play against Al Ain at home at Hazza Bin Zayed Stadium and snatch he match’s three points,” Bambo pointed out in the pre-match press conference dedicated for matchweek 11 of the Arabian Gulf League against Kalba.

He stressed that the Boss’ players have a firm will to win the opponents, and he highlighted the fact that the team’s actual starting point was when they played against Al Nasr last week. He also emphasized that one point will not be satisfactory and “they are more than welcome in our fort.”

Bambo added: “We are to win all the three points of the coming matches and deal with each match separately. We all understand that our match against Kalba will not be easy given their brilliant performance this season and that they are at the 6th spot directly behind our team with only a one-point difference. However, we are in form and shape and look forward to playing as we did in our recent match against Al Nasr and showing our fighting spirit, aggressiveness, and determination to win the three points. When it comes to me, I only focus on the points, not the performance in this coming match.”

Ahmad Mohammed also stated: “Our match against Kalba is more important than Al Nasr’s with all due respect to the latter. Indeed, all the teams’ performance levels are equivalent, which is why we have to redouble our efforts and boost our concentration. We have no choice but to do our best against our opponents to achieve our goals.”

Responding to a question on his brilliant debut following recovery from injury recent injury, he said: “I was fully ready to play and defend the Boss’ crest. When the head coach asked to play, I did not hesitate as I am always ready to go and on the spot to serve the best interests of my team.”

He concluded that he believes it was the team and not Ahmad Mohammed only who did well and extended his sincerest appreciation for all his teammates for a job well done.