The Defender of Six Crests.. Fahad Hadid: Wearing Al Ain FC Jersey is a Beautiful Dream That Finally Turns to Be True 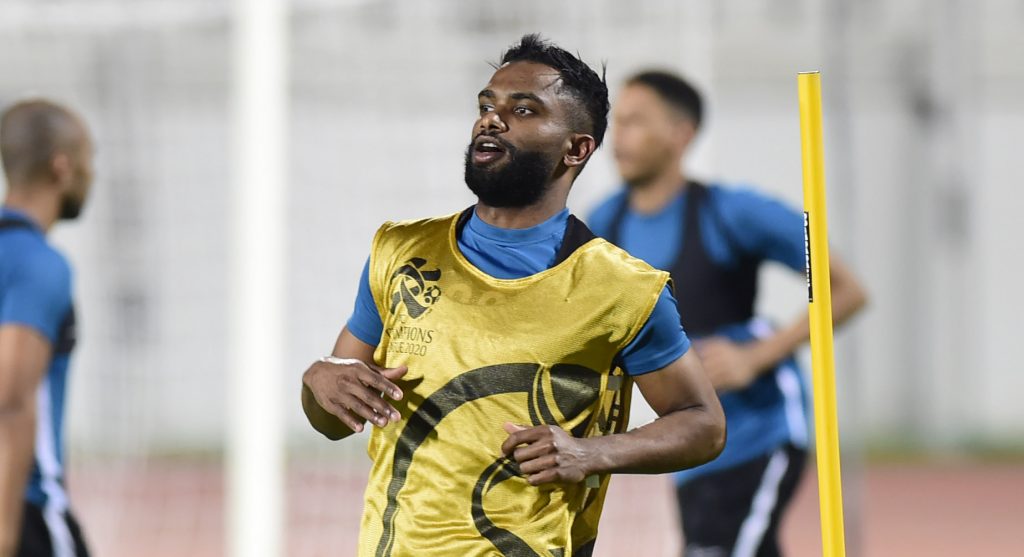 Feeling Stressed Makes Opponents Shiver When Playing in Al Ain’s Fortress
I overcome Hard Times by Determination and Firm Will
Pedro Emmanuel Deals with Players in Immaculately and Respectfully
ACL-2020 is the most Important Competition for me with Al Ain
Al Ain Players are Lucky to Have the Ainawi Nation Next to Them
For this Reason, I have never Felt Sorry for Any Decision I have ever made!

Quiet by nature and great when you deal with him and so well mannered when talking about his personality, the newly-arrived player Fahad Hadid enjoys high-quality skills and incomparable instinct in scoring goals and turned to be a star player when he was only sixteen years old playing for the first football team of Al Sharjah. He also won the President’s Cup and the Gulf Arabian League when he played for Al Nasr. He used to be the UAE Junior Football Team captain and played the final match of the World Cup held in Nigeria in 2009. Hadid has an exceptional career path as he played for six clubs of the Arabian Gulf League.

Fahad Hadid started his career in Al Sharjah before playing for Al Wasl under the command of Diego Maradona in 2011. Then he joined Al Nasr, Emirates, and finally, Khorfakkan. The last station for him is Al Ain. He also played for Franc’s Angers SCO for a short time. Head coach of Al Ain Pedro Emmanuel passed his recommendation to Al Ain Club Management to sign him to the Boss squad for his unparalleled speed and skills.

Fahad Hadid stated that joining a big club like Al Ain, given its leadership, stars and fans make it mandatory for each member to adopt the policy of being highly focused and professional in all aspects of your life on and off the pitch to achieve your desired goals. “This is mandatory, particularly when you are defending the crest of one of the best players in Asia, and this is a fact realized by everyone. My aspirations will never soar below the sky when playing with the Al Ain, and I look forward to achieving my goals and winning more championships with the team and make the Ainawi Nation happy.”

On his feelings when his former teams are scheduled to play against the Al Ain Team in Hazza Bin Zayed Stadium, he said: “Actually, preparations for games against Al Ain are usually different, especially if it would be held in Hazza Bin Zayed Stadium. It is not a secret anyway to tell you that we feel stressed as Al Ain fans are “different” and get together massively to support their team. As for any player wearing the Boss’ jersey, it is also different as he feels he belongs to a club with the most significant grassroots and receives massive support for all the fans. The fans are always there to support the players and their aspirations to achieve the Boss’s desired goals, i.e., to embrace the glory and win more titles. When you experience such an atmosphere, it will motivate you to do your best on the pitch and be up to the situation. All the players of the Al Ain Football Team are lucky to have such fans, and this is why they enjoy the culture of winning titles.”
As for his swift adaptation with the Boss squad, he commented: “It is all about the name of Al Ain and professional mentality that governs the system of playing in Al Ain squad. Indeed, I was received warmly by my new teammates, coaching teams, and the fans. Also, not to forget the Club’s capabilities that motivate you to push yourself to the limit, as well as the players’ quality skills and tactics adopted by the superb head coach. All these details are important for any player to adapt to the team swiftly and smoothly.”

Hadid commented on the whole one season not playing for any team, he stated that thanks should go to his personal French coach, Fabian, who used to follow up with him daily. “It is not an exaggeration if I tell you that it was the hardest period I had ever experienced as I was training alone. Indeed, any player experience such a hard time might collapse and feel distressed, but by determination and profound faith, he would be able to be back again to the fields.”

He added that the world of football is the world of fluctuations, and Al Ain Club’s offer was irresistible. He also said: “It was my dream to wear the Boss jersey, and finally it turned to be true. I consulted my close friends and on top my mother’s advice, and everybody recommended that I agree as it is Al Ain Team, and no one could deny such an offer.”

Responding to a question on his ambitions to achieve with the Boss, he said: “I believe the Club’s strategy is crystal-clear. Since I joined the Boss squad, the Club’s management identified the goals and the mechanism of dealing with the competitions. Our main goal is to qualify in the AFC Champions League 2020. When you talk about Al Ain, you are talking about a big name and its position in Asia. Al Ainown for its strong personality regardless of its position in the standing table and results achieved in this current version. All team members are well aware of what they are meant to do, particularly in this championship, which is closely related to representing the UAE representing championships in Asia.”

“We are all required to do our best and keep ourselves safe on and off the pitch. The current situation requires us to be more highly focused, and as I stated earlier, ACL-2020 is the most important championship currently,” he said.

When as asked about hoe coach Pedro deals with him and the squad players, he pointed out: “First of all, I would like to thank the professional Portuguese head coach, Pedro Emmanuel, for his trust and continuing support for me but also all the players. He is one of the coaches who embodies the concept of professionalism when it comes to his manners and how he deals with the players. I really extend to his goodself my sincerest appreciation and gratitude for him for all the support he showed to me since day one. He knows how to deal with his players and enjoys a significant friendly charisma that enables him to pass the messaged smoothly and professionally fix any situation or mistakes. He always holds meetings with each player individually after each match to further improve his skills and performance.”

Fahad Hadid extended his sincerest regards to Dr. Matar Al Darmaki, Chairman of Al Ain Football Club Company, who was so keen to meet me to identify all things related to the company’s strategy. He also thanked H.E. Majid Al Owais, Board Member of Al Ain Football Club Company, for his highly-appreciated professionalism during the negotiations phase.

He signed off by expressing his thanks to the head coach for receiving him warmly and unlimited support since his day one with the team. He also thanked the fans of the Boss for supporting the players and boosting their morale.